For starters, Monty Python is a British group that achieved its fame through a television program called Monty Python’s Flying Circus; but everything gained more impact with plays, movies, records, books, and musicals. In fact, the influence of the humor group has been cataloged like the one that The Beatles had in music.

However, at some point in his career, Monty Python decided to create a song about space, but with Stephen Hawking as an interpreter and that’s how “Galaxy Song” was born, a title that first appeared in the musical El Sentido de life and that has the robotic voice of the scientist. If you watch the video, you will have a great time of fun.

Check This Out: 9 Memorable Ideas To Entertain Your Guests

All the faithful lovers of The Big Bang Theory, will surely remember the appearances that Stephen Hawking had in the series; nothing more epic than seeing the scientist and Sheldon Cooper working together, especially on that day where Hawking warns Sheldon that he has found an error in his investigations, which generates great humiliation in the protagonist. It all starts when Hawking communicates with Howard, trying to find engineering help to solve a problem in his computerized chair to give a conference.

Before the emotion, Cooper wants to contact with the physicist so that it reviews one of his investigations. Hawking tells him that he is fascinated by the theory he poses, but that, unfortunately, he had an arithmetical error … and that makes Sheldon Cooper faint from the impact. In a way, Stephen Hawking is the only one capable of humiliating Cooper in the series.

This brief appearance happened in episode 21 of the fifth season, aired on the air in 2012.

It impacts on TV 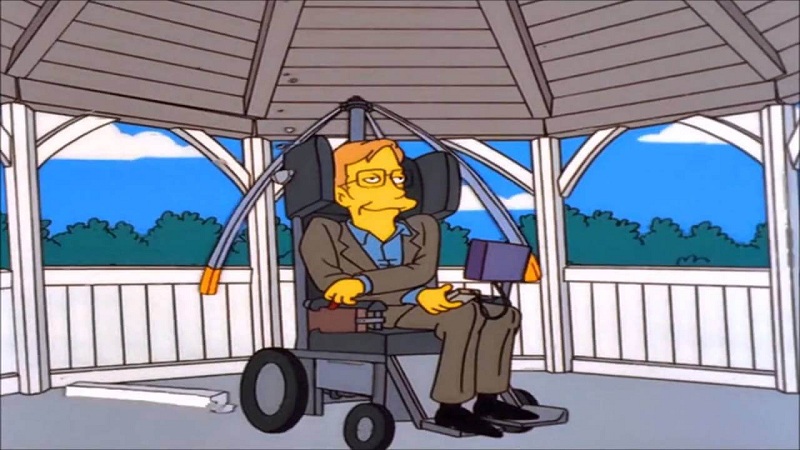 On television he participated in the famed caricature of “The Simpsons”, where he had an intervention in several chapters such as “They saved Lisa’s brain”, “Do not fear the Roofer”, “Stop or my dog will shot!”, “Elementary School Musical “and in the tenth edition of the special” The House of Terror “. In all those chapters he always helped a family member overcome some planned problem in his life.

Hawking also ventured into “Into the Universe with Stephen Hawking,” “Stephen Hawking: Grand Desing” and “Stephen Hawking: Brave New World,” as an example, in the latter he himself examined how science was advancing in the hand of the humanity and in what way it helped its evolution.

Hawking in the cinema

The seventh art would also pay homage to the physicist with at least four outstanding films such as ” Beyond the horizon “, “A short history of time “, ”  Hawking ” and the most recent ” The theory of everything “, which makes a complete tribute to the life, adversities and joys of Hawking.

If you want to know more about the personal life of Stephen Hawking, you can see The Theory of Everything, a film that looks through the eyes of the scientist who suffered from Amyotrophic Lateral Sclerosis or Charcot’s Disease, defined as a progressive disease caused by degeneration of motor neurons and neuronal roots that control voluntary muscle movements.

With this film, you will be able to understand all the complications that the British physicist faced with his suffering, his personal life, and his love relationships. Under the command of James Marsh and starring Eddie Redmayne and Felicity Jones, this film shows the dark and turbid side of science.

This is how the BBC dramatized Stephen Hawking’s early years as a student at the University of Cambridge, after his search for the “beginning of time” and his brave fight against his illness. It stars Benedict Cumberbatch (Dr. Strange and Sherlock Holmes).

If you want to get nostalgic with the story of Stephen Hawking, do not hesitate to see this title that tells the story of the scientist and his first encounter with the love of his life.